Wikitubia
Register
Don't have an account?
Sign In
Advertisement
in: YouTubers, Users who joined in 2009, American YouTubers,
and 9 more

Adam originally joined YouTube in 2009 as "Adamrockinrolland". Only two videos were uploaded to the channel. He then created the channel "AdamtheRandom1" in 2010. He uploaded one animation video there in 2013.

It wasn't until 2014 that his now famous channel would be created. Adam started his SomeThingElseYT YouTube channel on January 10, 2014. His first ever video was uploaded around April 2014 titled Trolldawgz gettin started. His oldest public video was a Gym Skit. He made his first animation video, a story about how he got into a car crash, on September 5, 2016. He continued with animation and gaming content, until he later quit gaming entirely, and focused solely on animation.

Since them, Adam continues to make animated videos and started collaborating with other YouTuber's (especially YouTube animators) such as Let Me Explain Studios in Stole Mom's Credit Card to Buy N64.

On March 22, 2019, Adam uploaded a song to Spotify, iTunes and YouTube called "I'm Something Else". The song is about Adam overpowering the bullies he got. It was produced by American production duo Foolish Ways and is a follow-up to his video Just Be Yourself. The song goes along with other Animation Squad members making songs, like "Empty" by JaidenAnimations and "Life Is Fun" by TheOdd1sOut, both of which were produced by Boyinaband.

On October 12, 2019, Adam uploaded a song called "Help!", later "Help! Oh Well: Take 1", which he made in a single day. Adam wasn't satisfied and later posted a fully animated version, "Help! Oh Well: Take 2". This version was released on Spotify and Apple Music much like "I'm Something Else", and is a follow-up to his video Fame is Lame. This time he collaborated with OxygenBeats, who has also worked on "Life is Fun". An explicit, animatic version was posted on Adam's second channel, SomeThingElseYT2.

In real life, he wears glasses.

In his animations, he is portrayed as a demon wearing a hoodie that says "Common Sense". In "I'm Something Else", he is seen with a red hoodie with a black logo on it. In "Help! Oh Well: Take 2", he is instead portrayed in a red bomber jacket with the same logo, and at the end of the video it has "help" written on the back. His glasses are also seen in "My worst nightmare ever: Mama seeks" and "I'm Something Else".

He has ADHD, and has collaborated with other animators, such as Jaiden Animations, TheOdd1sOut, and several others.

On November 22, 2017, Adam posted a tweet about his latest video at the time being demonetized. Later on, he revealed that all of his videos were demonetized. Adam contacted YouTube many times, and nothing helped. Adam left his MCN off, and that disabled his monetization. He tried getting his monetization verified, and it didn't work. On January 2, 2018, Adam's monetization was turned on.

On April 14, 2018, Adam tweeted about him being locked out of his YouTube account. He had been locked out for nearly 3 weeks before he tweeted about it. He asked YouTube on Twitter if they could help because he reset his password and typed it wrong when he wrote it on paper. He tried to reset it again, was denied because they didn't think it was him. He was logged on in his computer and phone but couldn't upload.

Generally, his animations are videos are family-friendly and suitable for a more general audience, including kids, teenagers, and adults. However, some of his earlier and more recent videos have uncensored cursing. After YouTube updated their monetizing policy, Adam mostly censored his cursing, but turned it into a joke where a coin would beat him up when he swore, the coin representing YouTube demonetization. 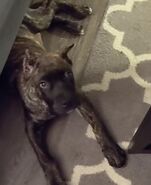