Wikitubia
Register
Don't have an account?
Sign In
in: YouTubers, Users who joined in 2015, Female YouTubers,
and 8 more

After joining YouTube, Mongeau quickly gained subscribers. She has collaborated with other YouTubers such as Jonah Green, Cody Ko, Polina Beregova, Channon Rose, and Ricky Dillon.

Tana had a difficult childhood. She has previously spoken about the constant fighting in her household. She also had a stalker when she was in 2nd grade that may or may not still be stalking her. Tana has sent him to jail, but he has since been released, and she believes that he broke into her old house. Growing up in Las Vegas had also exposed her to parties, drugs, and alcohol at a very young age.

On December 10, 2016, Mongeau tweeted at iDubbbzTV deriding him for his frequent use of the N-word in his videos. The tweet stated, “@Idubbbz so 3 million ppl subscribe to u and u openly say the n-word and retard???? kill yourself”. Mongeau further derided iDubbbz in her livestreams and other videos. In response, iDubbbz purchased a VIP ticket to Mongeau’s show in San Francisco, and, on January 21, 2017, attended said show. At the VIP meet-and-greet, iDubbbz posed for a picture with Mongeau and while the photo was being taken, iDubbbz said: “Say ni**er!”. This caused outrage from onlookers, and Mongeau responded by storming out of the area, prompting security to ask iDubbbz to leave, which he did.

On February 6, 2017, iDubbbz released a video titled “Content Cop - Tana Mongeau ”, a part of his Content Cop series. In it, he defends his use of the N-Word and accuses Mongeau of hypocrisy by showing past clips of her using the word too. He stated that his use of the word is not meant to offend as it is done in a comedic context, while he deemed Mongeau’s use of the word as "mean-spirited". In the video, iDubbbz also shows footage from the incident at Mongeau's show and criticizes her response to it. He also discusses the use of derogatory terms in a broader context, and the weight which society places on specific words in terms of their offensiveness. 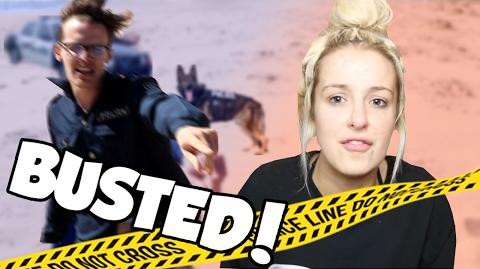 For more information, see the TanaCon article at the Tana Mongeau wiki.

Due to her absence from VidCon 2018 for issues that have been brewing between VidCon security and the bigger YouTubers attending the event, Tana wanted to create her own convention called "TanaCon". TanaCon would start the same day as VidCon; however, on day 1 of the event, the fire martials shut it down due to safety hazards, being an excess of 4000 people above the maximum site capacity of around 1000. There was a video on Twitter showing the entire line of people going to TanaCon. When people were inside the "TanaCon building", there were huge chants saying "We want Tana" and "Refund" repeatedly.