RedVacktor uploaded his first video 'Blockywood Minecraft Machinima Teaser!' on September 13, 2014 which was supposed to become a machinima series. However, it did not continue after the trailer. He uploaded a Minecraft modded do not laugh (Shrek mod) with Sky and friends before he stopped uploading for a while.

Red became roommates with ThatGuyBarney and began working at Skymedia in January 2016, as JinBopGaming had left the offices one month prior. He was in videos with mainly Skydoesminecraft, House_Owner, ThatGuyBarney and Mithzan. He did not upload until June 2016, after Mithzan and House_Owner left the offices to start their own solo careers. He began playing with other YouTubers such as SGCBarbarian, Preston Danger and PrestonPlayz.

He used to mainly play Minecraft and GTA V before Skymedia shut down in July of 2017. He currently lives in the Lakehouse with his friends; Adam (Sky Does Everything/NetNobody), Jason (Foxy), Gooby (Goobyandthevlog), Chadd (ChaddUnderwood) and his girlfriend Bre (BreThatsMyName). He now focuses his channel on Fortnite.

Red has developed several entertaining personalities, such as Apple and the Master of Moovoodoo for Minecraft and America's Man for GTA V. He earned the title 'YouTube Sensation' RedVacktor in mid-May 2016.

His Minecraft skin consists of a redhead in a red dinosaur suit, with an R inside of a yellow circle on his stomach, but his old skins featured the superhero The Flash or had a Flash symbol. 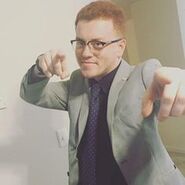 Add a photo to this gallery
Retrieved from "https://youtube.fandom.com/wiki/TeamVacktor?oldid=831001"
Community content is available under CC-BY-SA unless otherwise noted.