Technoblade (born: June 1, 1999 (1999-06-01) [age 21]), or simply Techno (also known as Technothepig), is an American gaming YouTuber​​​​​ known for his Minecraft-centered content and collaborations with other YouTubers and Twitch streamers.

He is commonly regarded in the Minecraft community as one of the best players in the world for his skills, strategy, and tactics in PvP. He is also well-known for being in a friendly rivalry with fellow Minecraft YouTuber Dream.

He is generally well-received throughout the Minecraft community for his dark sense of humor and sarcastic persona. Many people describe his personality as "a mixture of laid-back, cocky, and egotistical."

Technoblade makes the majority of his videos on the Minecraft server Hypixel. The time range between his video uploads is usually a week to a month although he has tried (and failed) to do daily episodes. He has also done many Minecraft Livestreams, including ones on Hypixel Bed Wars, Minecraft Mondays, MC Championship, SMP Earth, Minecraft Story Mode, Party Games, and Dream SMP. He is part of Sleepyboisinc along with Wilbur Soot, Ph1LzA, and TommyInnit. He has been nicknamed "The Blade" by Tommy.

In the past Technoblade mostly uploaded Blitz Survival Games and had a 500th episode special titled "Ultimate Hunger Games" which was his number one viewed video for a long time before he entered later stages of his channel and gained more fame.

He has gained [PIG+++] rank on the popular Minecraft server Hypixel for winning the tournament Minecraft Monday four times. He has stated many times that he has hot elbows, one of which he has revealed at 1 million subs on August 18, 2019. He also has 3 sisters, 1 brother, and a dog named Floof, whom he occasionally uses for views.

Technoblade is very well known throughout the Minecraft community for being very good at PVP combat. He has had many collaborations with other famous YouTubers, many of which have been through Minecraft Monday, some of which have even been teammates during the said event. He has also made many likely embarrassing older videos of him doing things like cooking and green screen content showing his YouTube awards. Hypixel continues to be his main means of obtaining views.

In late November 2019, he joined a Minecraft server named SMP Earth, a Factions server where an assortment of YouTubers plays survival on a 3000:1 recreation of the Earth. Technoblade has also begun streaming different games aside from Minecraft, such as the popular Minecraft spin-off "Minecraft Story Mode", and "Mount & Blade II: Bannerlord", which consists of 5 streams as of June 15. During the Potato War, Technoblade has made multiple alternative Minecraft accounts such as Asiyn, Whitelisted, Whitelisted 2, PommesDeTerre, NoHaxCanJustFly, Ender_Gamer09, and BizarreZzz.

Technoblade also often plays Hypixel's version of Skyblock, often featuring his friends, or co-op members, Jiyn, TimeDeo and xHascox. Technoblade has made an entire series of Hypixel Skyblock..(Most known for the Fastest man alive and taking #1 potato rank from a Im_a_squid_kid)

Technoblade was born on June 1, 1999, and currently resides in San Francisco, California. He has three younger sisters and a brother named Chris. Technoblade has made a reference to a younger brother, although it is unclear if he is talking about Chris or has another brother.[1] He also has a small dog named Floof.

He resided in California for most of the beginning of his YouTube career, attending and graduating high school in the state. In mid-2018, after his gap year, Techno moved to Chicago, Illinois for college, before moving back to San Francisco after dropping out. He currently lives with his father, as revealed in a stream when he forgot to mute his microphone.[2]

Techno has made multiple references in his commentary videos and tweets about having ADHD (Attention deficit hyperactivity disorder). He actually does have ADHD, confirmed on a Hypixel Forum post from September 27, 2013.[3]

The Account is "Technoblade " and is mainly played in Hypixel (Skywars/Bedwars). Played in Minecraft Mondays and MC Championship. He also owns the accounts Whitelisted and Whitelisted2 as shown in his Great Potato War videos. His account "Whitelisted" was originally created for a joke.[5] Not many people know about another account he owns, 1 being: Technogrenade, used in "Alt Account! - Solo Skywars #12" back in 2016, and the other is currently unknown.

Before the creation of his main YouTube channel, "Technoblade", he published videos on a channel he created many years ago named "StudioLore", in which he posted a very small amount of irregular low-quality Team Fortress 2 videos and one Roblox Sword Fight On The Heights video. In his time on this channel, he accumulated around 50 subscribers. Technoblade was around the age of 13 when he published videos on his older channel. He has only mentioned this older channel in his 1 million subscriber's special video and talks about it in detail.

In Technoblade's video "the quest for the [PIG] rank", he says that he created the channel for the sole purpose of being confident and getting 10 million subscribers. But, when he met someone with the 3-coloured [McProHosting] rank he quickly decided that he "needed to get an even cooler rank." Technoblade came up with the idea to have a uniquely colored rank called the [PIG] rank. When he tweeted Hypixel how many subscribers he would need to acquire this rank, Hypixel responded with 10 million.

This is apparently "all part of his master plan" and supposedly increased his motivation to tryhard his YouTube career even more than usual. Despite not yet reaching 10 million subscribers, he still gained the [PIG], [PIG+], [PIG++], and [PIG+++] rank after Hypixel donated in his Minecraft Monday stream, stating that he would get [PIG] rank if he'd win the tournament. Following that victory, another plus sign would be added to his rank with each extra win in the event. The [PIG+++……] later became a meme and an inside joke among his audience, and he constantly uses [PIG++++(?)] in his thumbnails.

Recently Technoblade has joined the Dream SMP. He had joined because of a war against jschlatt and Quackity. Technoblade joined with TommyInnit and Wilbur Soot, however he is found out to be a traitor. He was then banished from L'manburg, and remained in exile for a while, wanting anarchy across the server. He was later joined by Tommyinnit, where they teamed up to get back both Tommy's Discs, and blow up L'manburg with withers. Tommy then betrayed Techno again, and went back to L'manburg, while Technoblade blew it up, forming an alliance with Dream and Ph1lza.

In 2019, Technoblade participated in Keemstar's Minecraft event, Minecraft Mondays, where YouTubers and streamers would come together to play a wide variety of minigames, and the prize for winning was set as $10,000 dollars to be split between the first-place team, changed to $5,000 past week three. He won four times: week one, week two, week six, and week ten. He took part in the minigame-based event with other popular YouTubers and/or streamers including Skeppy, CaptainSparklez, Speedyw03, Vikkstar123, DanTDM, JeromeASF, jschlatt, MrBeast, Lachlan, PewDiePie, James Charles, Ninja and more.

In this event, Technoblade had the unique opportunity to fight and kill celebrities and his childhood heroes for money (or as Techno says Blood for the Blood God!) Hypixel, the owner of the biggest Minecraft server in the world and the server Technoblade mainly makes videos on, sent a donation promising that if he won the tournament, he would be given [PIG] rank for 1 week. Minecraft Monday contributed many subscribers and viewers to Technoblade's channel, due to the competition being held by Keemstar, and being more mainstream. In the end, he won a total of $15,000 from the Minecraft Monday tournament series.

In the first week of Minecraft Monday, Technoblade won the event with ShotGunRaids and received the $5,000 payment, as well as the prestigious [PIG] rank, which Hypixel was originally only going to give to Technoblade after he hit 10 million subs.

In the second week of Minecraft Monday, teamed with iBallisticSquid, he won a second time, this time only receives a $2,500 reward. Additionally, he received the [PIG+] rank on Hypixel.

In the third week of Minecraft Monday, Techno was teamed with ChrisO2, and there was an assortment of games including dropper, parkour, and more. Technoblade lost first place on teams but won first place individually with 937 points. However, only winning as a team will earn you the cash reward.

In week 4, he teamed with James Charles and did not win either the team score or the individual score.

In week 5, Techno was paired with CallMeCarson. However, Carson logged off halfway through the event, so Techno's team placed 5th overall. He placed 2nd Individually.

In week 6, he won for the 3rd time with jschlatt, both as a team and individually. Additionally, he received the [PIG++] rank on Hypixel.

In week 7, due to glitches and bugs in the game modes "Build Battle" and "One Shot", it is unclear who won the event. However, Technoblade and his teammate, Junky Janker, are in the running for the victors of MM week 7 since they were only 2 points behind the 1st place team, BadBoyHalo, and Skeppy. In any case, Technoblade won individually.

In week 9, Technoblade's teammate was JackSucksAtLife, and the team placed fifth. However, Technoblade still placed first individually. This was Techno's lowest team placing.

In week 11, Technoblade's teammate was ConnorEatsPants. They placed third as a team, and Technoblade placed second to aquathecheater in individual points. Week 11 was also the week of the fall.

In week 12, he teamed up with Ninja, however, he ended up dropping out 10 minutes early due to internet problems. His team still placed third place, and Techno got second place to m0xy in individual points.

In week 13, he teamed with Wilbur Soot. His team placed third place, and Techno got third place after xNestorio and m0xy.

The main game was cancelled due to a hacker hacking the Minecraft Monday server. Techno was going to team with Wispexe on week 14, however, Techno instead played Hypixel with 7 other YouTubers, and tied for first place with TapL.

In 2020, Technoblade participated in Noxcrew's and Dangthatsalongname's MC Championship event, an event where YouTubers and streamers would come together to play a wide variety of fancy minigames. The tournament consists of 10 teams and 40 players, featuring a variety of custom minigames. The prize is a special MCC coin by Noxcrew.

Techno and PeteZahHutt are the only 2 players in the tournament to have never left the Top 10 Individual Leaderboard in their participation in MCC.

Techno and Quig are the only 2 players in the tournament to score Top 2 Individual with a team 5th place and lower.

Techno also has the second-highest debut MCC performance ever with a whopping 3665 points, only behind TommyInnit with 3686.

MC Ultimate is a Minecraft Hunger Games event for 250+ streamers. Organized by Pikaclicks, or Noah, it is known as the largest hunger games event held in the MC Community. On July 24th, 2020, it was announced that Technoblade would be participating in Season 2 of the event as a last-minute add-on/replacement.

After the MC Championships 8 Teams were announced, MrBeast indicated that he would like to have Technoblade and Dream duel for $100,000. They both agreed and started to train immensely. The duel was set to take place on Thursday, August 27, 2020, and was not streamed live. The results of the Duel was announced on a Video Premiere on MrBeast's Gaming channel, MrBeast Gaming, on Saturday, August 29, 2020. The Duel consisted of fairly basic kits and 10 battles, 5 in 1.16 PVP, and 5 in 1.8 PVP.

Technoblade won the 100K duel against Dream, 6-4. They quickly made analysis videos later, showcasing their POV's and Techno and Dream agreed to split the money beforehand, regardless of the outcome. However many fans of Dream showed backlash against Technoblade winning the duel although Technoblade expressed to his fans not to send hate towards anyone, as in the end, it was a close and good fight. 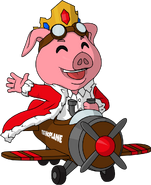 Technoblade's 'fanart' for Dream.
Add a photo to this gallery

Retrieved from "https://youtube.fandom.com/wiki/Technoblade?oldid=1054715"
Community content is available under CC-BY-SA unless otherwise noted.