Charles was an elderly man who had anger problems, hence the name Angry Grandpa. He was famous for talking in a gibberish tone whenever he had his rage fits or got annoyed. Additionally, he referred to his fans as his "Youngins." His youngest son, Michael, tried to calm him down before he inevitably destroyed all of his stuff. Many did not know if the show was real or not, with many conspiracies being made, one in which included that Michael was using his father's "outbursts" for money and fame, which is quite unlikely. Michael also has a YouTube channel called KidBehindACamera that frequently makes content with sillysuperpop and GreatnessTV

Charles died at his home at 4:17 PM in Summerville, South Carolina on December 10, 2017. His death was caused by cirrhosis and pneumonia. TheAngryGrandpaShow channel is still managed by Michael, and uploads unreleased pranks and other vlogs. However, the channel does not upload as much as when Charles was alive.

Charles was born on October 16, 1950, in Chatham County, Georgia. His father, Sgt. Charles Marvin Green Sr. (January 25, 1925 - July 6, 1987 [aged 62]), was a World War II veteran and his mother was named Dorothy Mae Green (neé Meyer; March 18, 1926 - December 25, 1999 [aged 73]). He was said to possess English, Irish, Scottish, Samoan, and Welsh ancestry. Charles was raised in the Sherwood Forest neighborhood in Charleston, South Carolina. Charles once mentioned that his father got into a terrible car accident and was paralyzed from the neck down and later died from his injuries in 1987. When Charles was just a kid he claimed that a ghost had came to his grandfather's funeral wearing a nice blue suit, when he explained to his grandmother about the stranger, she then revealed to him that the man's name is Mr. Jones who died 10 years ago and was buried in that blue suit. He had once claimed to be buff when he was younger.

Charles was once good friends with serial killer Donald Henry "Pee Wee" Gaskins in the early 1970s. Charles says he was never aware that he was a murderer, but said they once got into a drunken fight in which Charles slammed his head onto the counter causing him to bleed unconsciously on the floor.

Gaskins told him shortly after, that if it weren't for them to be friends, "You'd be in my graveyard tomorrow." When Gaskins was caught, Charles was stunned and said Pee Wee later wrote a letter to him from prison saying he missed him. but Charles immediately told him not to write him again. Charles says this experience sobered him up for a long time as he could have been one of Gaskin's victims because of his drinking. He also said many years after the prison Pee Wee was held in closed down and was going to be torn down but they offered tours before it was destroyed. Charles took his kids to see his cell, and on the wall was a drawing of a pentagram with Charles's name written in the center of it.

Charles's videos mostly consisted of raging, pranks or vlogs. Michael's longtime girlfriend, Bridgette West, was usually in on Michael's pranks and sometimes, she would warn Green about upcoming pranks, enabling him to turn the tables on Michael.

Charles was famous for destroying laptops, computers, gaming consoles, televisions, cellphones and other electronic devices in his fits of rage. He also made a serious video, called Grandpas Emotional Thank You which uploaded on his sons channel. In the video Charles started crying of happiness. His most popular video to date on TheAngryGrandpaShow was 'Angry Grandpa Destroys PS4!' where Charles destroys Michael's PS4 after he did not go to his house to help him make Christmas cookies.

Charles, during his lifetime, had another YouTube account called GrandpasCorner (with 800K+ subscribers), in which he mostly gave his own personal take on current events, stories from his past, post video events, advice, and vlogs to his followers there on his channel. His most known video on GrandpasCorner is Grandpa Plays Minecraft. Charles played Minecraft, but he raged because the video game was boring and frustrating.

Despite his angry and brash persona on camera, people who meet Charles in person claim that he was very charming, polite and funny. His youngest son Michael works as the website webmaster and graphic designer, and despite their brash and often confrontational relationship on camera, he and Michael claimed they have a good father-son relationship off camera. Charles was married to his wife Tina for thirty years, in what can be described as a very unhappy marriage as Charles would often cuss her out and disrespect her, and destroy her Elvis memorabilia in videos. This is because Tina spent a lot of their money (including money reserved for paying bills) on Elvis stuff among other things. He stated in one of his videos talking to his late sister Charlene that he only married Tina because she was pregnant and wanted to do the right thing. He had gained a hatred towards everything at times, and especially to what his ex-wife Tina loves, which includes Elvis Presley, cats, and Christmas. He and Tina divorced in 2012 due to several reasons, including him talking to female fans on Skype, as well as his constant never-ending verbal abuse and disrespect towards her over thirty years. From then until he death, he claimed he was happier than he had ever been before now that Tina is out of his life.

He used to live in a thirty year old trailer in Trailwood Trailer Park in South Carolina for a long time, and was home to where the majority his videos took place up until mid 2012 when Boeing purchased the park to turn it into a highway and ultimately forced the residents to vacate the area. This lead to Charles rallying his fans in an attempt to stop the purchase and save hundreds of residents from relocating or becoming homeless, but unfortunately it was to no avail except giving them time and the lot was ultimately sold and Charles and everyone else was forced to move out. This experience caused Charles to have an increased hatred for large corporations for being able to "push poor people around" as well as for governor Nikki Hailey for doing nothing to help the residents or trying to stand up for them.

He made a long and very emotional and personal vlog on his GrandpasCorner channel titled "GETTING MY LIFE BACK" where he talked about his past struggles with his weight that caused him to undergo gastric bypass surgery. While the surgery did result in him losing weight it gave him the horrible side effect of dumpings syndrome where he was pooping 20-30 times a day and caused him horrible pain and struggled with the syndrome for many years until he found a medication that made him go to the bathroom normally and kept the dumping syndrome at bay. He encouraged all his fans who are obese to not undergo the surgery and experience the adverse and painful side effects and risks and instead lose the weight the traditional way by dieting and exercising.

Charles died at his home on December 10th, 2017 in Summerville, South Carolina, due to cirrhosis and pneumonia. He had frequently been in and out of the hospital ever since he was diagnosed with cancer in February 2017 and recovered.[1] Later that same month, due to cancer he started to have pneumonia, which made it hard for him to breathe.[2] The main cause of his pneumonia was due to long term smoking. He started smoking cigarettes at 6 years old until his death. Charles died 9 months after being diagnosed. Throughout going through pneumonia, in July 2017 he then had cirrhosis, which caused his liver to scar and its cells to fail. Charles' funeral was held 4 days later on Thursday, December 14th, 2017. He was later cremated.

Towards the final months of his life, TheAngryGrandpaShow channel stopped uploading videos as often so Charles can get treatment and relax so he wouldn't add more problems to his life-risking condition.

Charles admitted to wanting to go back to doing YouTube with Michael and Bridgette as often as he did before he was diagnosed, but the couple disagreed and pushed Charles away from YouTube enough for him to recover while the couple continued vlogging their lives on Michael's personal channel, KidBehindACamera.

The last prank on Angry Grandpa was on October 6, 2017 called, "THE HALLOWEEN SPAGHETTI PRANK".[6]

After the announcement of his death, many viewers of his channel and YouTube in general, including famous YouTubers (McJuggerNuggets, Keemstar, Boogie2988, FaZe Rug, and more)[8][9][10][11] and people from WWE (Mick Foley and Paul Heyman)[12][13] expressed their condolences on the loss of Charles on various social media platforms. 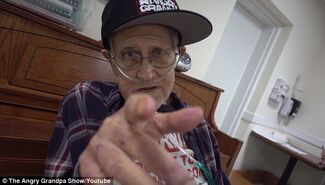 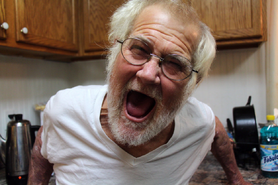 Most popular image of Angry Grandpa following his death. Used for memorials. 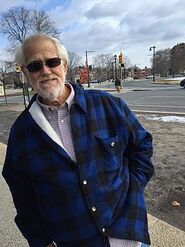 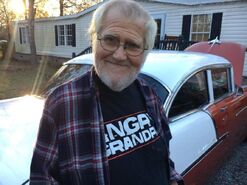 Angry Grandpa beside his dream car, a 55 Chevy Bel Air 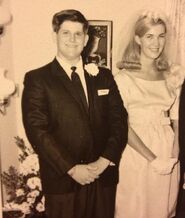 Angry Grandpa when he was 17 years old, married with Tina. 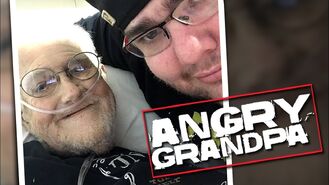 Angry Grandpa with his son Michael 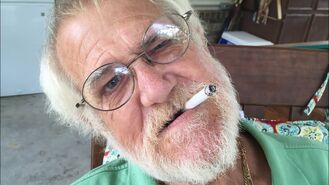 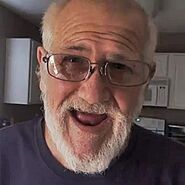 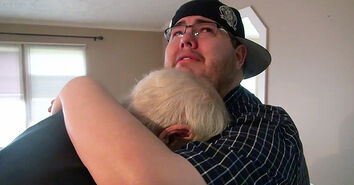 Retrieved from "https://youtube.fandom.com/wiki/TheAngryGrandpaShow?oldid=878780"
Community content is available under CC-BY-SA unless otherwise noted.