Robert James Rallison (born May 14, 1996 (1996-05-14) [age 24]), better known online as TheOdd1sOut (formerly TheOdd1sOut Comic), is an American YouTube cartoonist living in Arizona and is best known for his comic series and his YouTube channel of the same name. As a member of the "Animation Squad", he sometimes works with YouTube animator friends such as TimTom, Jaiden Animations, and SomeThingElseYT, appearing in their videos and vice-versa. James frequently collaborates with smaller YouTubers, which grows both their audiences by thousands. At the moment he has 13.2 million subscribers. He has also written a book.

James also posted speed drawings of the comics he posts on Tumblr, Twitter, Tapastic, Facebook, and iFunny, as well as his own website. In these videos, he shows the process of a comic's creation and rambles about the events in his life. He also recently published a book titled, "How to be Cool and Other Things I Definitely Learned from Growing Up". He has planned to create a another book.[1]

Rallison uploaded the first strip of his webcomic TheOdd1sOut on June 14, 2012, on Tumblr and later on iFunny. Throughout his first year of making comics, he played with his style a lot before settling on his current bubble style. He still posts webcomics, though a lot less frequently than he used to due to most of his time being occupied by YouTube.

On August 30, 2014, about two years after he started making webcomics, Rallison started making YouTube videos. He called it, "theodd1sout comic", and uploaded a video about a book he had made in elementary school on the same day, titled "A Book I Made as a kid". After a few years of steady growth, in April 2016, his channel gained over 278,000 subscribers, giving him a total of over 400,000 subscribers as of that May.

James' most popular video used to be his 'Work Stories (sooubway)' video about his work at fast-food chain Subway (known as 'Sooubway' in his videos, possibly to avoid copyright claims), gaining over 30 million views. His videos about working at Subway have also been featured on Foodbeast. The Subway that where James used to work at since closed down, according to the most-requested video, Sooubway 4: The Final Sandwich.[2] The website's writer Peter Pham has called the videos "amazing" and "hilarious". His most popular video is 'Life is Fun', a song with Boyinaband about "existential dread".

He also has a second channel called TheOdd2sOut.

James' book, "How to Be Cool and Other Things I Definitely Learned from Growing Up". 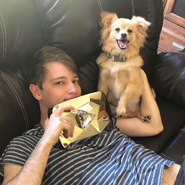 James, with Floof and his Diamond Play Button. 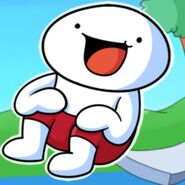 theodd1sout cover picture
Add a photo to this gallery

Retrieved from "https://youtube.fandom.com/wiki/TheOdd1sOut?oldid=576105"
Community content is available under CC-BY-SA unless otherwise noted.