Locked page
watch 01:40
Boba Fett Returns - The Loop
Do you like this video?
Play Sound

Yoav Landau, better known online as the founder and producer of The Living Tombstone alongside main vocalist Sam Haft, is an Israeli-American musician and YouTuber, best known for his original songs on well-known video games, with his Five Night's at Freddy's music series being one of the most popular playlists on his YouTube channel.

Starting off creating music in the My Little Pony fanbase, he now creates a variety of original songs, remixes, covers songs and parodies, often featuring characters from well-known memes, such as the Globglogabgalab, and Robbie Rotten from Lazytown (in "We Are Number One").

He occasionally made vlogs doing channel announcements, reading YouTube comments, promoting songs and making subscriber special videos and so on, although he's stopped making these since January 2016.

"BLUE version will be the nice and tidy mainstream version for the general audience to enjoy, intended for casual listening.

RED version is where I go all out and make it as intense, crazy and evil as possible, this is intended for people who want more from my music."[1]

He discontinued the Red VS Blue series near October of the same year, when he released the Blue version of the "Dead Kitten Song" which unexpectedly turned out to be the last, without a Red variation. The reason for this is currently not well known, although it is thought that he simply did not enjoy making them anymore, and having the expectation to make both versions and quickly whip up another without the thought of quality or whether it's a version he's proud of releasing. His last mention of it is on a Twitter reply thread, stating, "I am not doing anymore Red vs Blue stuff, I'll leave the Blue version where it is and leave it be."

He reinstalled the series June 2018, with his Globglogabgalab Remix, and continued until Right Now (RED) in July 2019.

In 2019, The Living Tombstone, now a group, signed with Warner Music Group.[3] Now working with songwriter and vocalist Sam Haft, the co-writer and singer on My Ordinary Life, The Living Tombstone explained that they had taken time off to release an album, titled "zero_one,"[4] and subsequently released the first single from the album, Drunk , on June 11, 2020. Their second single, and formal album announcement, came in the form of Sunburn . 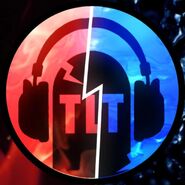