Thomas "Tommy" Simons[1] [2](born April 9, 2004 (2004-04-09) [age 17]), better known online as TommyInnit (formerly Channelnutpig), is an English gaming YouTuber and Twitch streamer known for his Minecraft-related streams and videos, most notably his collaborations with YouTubers and streamers in the ending Dream SMP. He is known by many as one of the fastest-rising breakout stars in the Minecraft community.

His content consists of Dream SMP, Mods, SMP Earth, Minecraft Championship, hacking, and Hypixel Skyblock videos. In September 2019, he was given the YouTube rank on Hypixel. Tommy uploaded his first video named "Guide to Lobby Spamming" on September 9, 2018.

TommyInnit started constantly streaming on Twitch in late 2018, where he streamed PUBG, Fortnite, or Hypixel public parties (mainly Bed Wars). By early 2019, Tommy gained Twitch Affiliate and started gaining more viewers. While TommyInnit had a small fan base during February 2019, his fanbase was strong and full of many Hypixel Influencers, a result of his Hypixel news videos.

When Tommy was 11-12, he started a YouTube channel called ChannelNutpig, but people would often bully him for it. As a result, when he was 13, he renamed the channel "tom" and privated all of the videos on the channel. A year later he started streaming on Twitch for 2k followers, and a year after that, he started the "TommyInnit" YouTube channel. On February 9, 2021, Tommy posted a new video on ChannelNutPig, stating that he is returning back to the channel and posting a new video every hundred subscribers (as long as he remembers). This video has ranked up more than 1.7 million views, and Tommy has not kept his promise (at this time). The channel now has over 381k subscribers.

In December 2019, his school found out about his YouTube Channel, and one of his teachers (whom he refers to as Mr Brett) even playing a video of his on the projector screen. However, a bit before this in the previous year, the sister of Tommy's friend, Eryn, found out and would often creep him out with the fact she could scream at any point he was a Minecraft YouTuber. As well as this, a couple of others had previously found his channel through a Wilbur Soot SMPEarth video.

TommyInnit usually makes videos where he plays Minecraft with mods, enjoying the game and its new modifications with his friends, most notably Wilbur Soot, Quackity, Slimecicle, Tubbo and Ph1lza Minecraft. Before this new era of modded Minecraft videos, he frequently explored the universe of hacking on Minecraft, with his best friend Tubbo. These videos include hacking on Minecraft VR and turning every single hack on.

Before any of these videos, Tommy started out making Hypixel SkyBlock videos, and he had also made a video exposing The Archon server. Tommy streams on Twitch, which at the moment he is streaming the Dream Team SMP, or just having fun with his friends with a random mod. He normally does these mod videos with Wilbur Soot, Ph1lza, Slimecicle, and occasionally Quackity and Tubbo.

Tommy also owns the channels, TommyVODS, TommyOutit,and tomaye. The TommyOutit channel consists of Stream Highlights (the channel used to have some content from The SMP series Blockworth, but he privated/deleted all of them) or other videos not taken from stream. The TommyVODS channel contains his full uncut livestreams archived from Twitch, or VODs (Videos On Demand), and is managed by Tommy's friend Rudylmao.

The tomaye channel contains Tommy and his friends reacting to various unusual YouTube videos or Twitch streams, and is officially inactive for the time being, as Tommy had said before it only came to be as he wasn't too proud of the videos he had put out on the TommyInnit channel (back when he was pushing out content daily). The TommyCLIPS channel is a now defunct channel where he used to upload clips and highlights from his streams.

Tommy came under fire after he asked for a "shoutout" under KSI's tweet about the tragic passing of legendary rapper Earl Simmons, aka DMX. KSI was one of many online personalities and celebrities who took to social media to pay tribute to the late icon. However, KSI's tweet ended up being overshadowed by one particular comment from Tommy, who had just turned 17 years of age recently. In the comment, he asked KSI to post an Instagram story giving him a shoutout in honor of his birthday. This not only proved to be a case of horrible timing but was also labeled as "insensitive" and "disrespectful." Amid rising backlash, he eventually realized how triggering his reply was and immediately deleted it. He later addressed the situation on stream and attempted to clarify his comment by revealing that he hadn't read KSI's tweet properly.

In 2018, TommyInnit just started streaming on his Twitch and started his career. However, Tommy used "Lobby Spamming" to get Viewers on his live streams. Lobby Spamming is the act of going into a Hypixel Lobby full of players and posting your stream link and some sort of clickbait, whether it was fake giveaways or something else. Tommy and his friend Badlinu set up chat macros to make Lobby Spamming easier. During late 2018, Tommy asked a server staff member if Lobby Spamming was allowed, and the staff member said it was.

In late December 2018, a server staff muted TommyInnit for 7 days. The staff member then replied with a semi-rude comment after Tommy was muted. However, the staff figured out that Tommy used macros to help Lobby Spam. Then, Tommy was banned for blacklisted modifications by using a macro. However, when Tommy made his ban appeal he brought up how a server staff said that Lobby Spamming was allowed and a rude comment a staff made after he was banned. A Hypixel Admin felt bad about the whole situation, and approved the appeal, allowing Tommy to join Hypixel again. However, Tommy was still muted but used this time to improve his editing skills.

This incident occurred on June 26, 2019. He got banned due to his video titled "the ranked skywars experience (handcam)" In this video, he made a joke about downloading the Vape Client (though he never actually did this). Many people believed that this ban wasn't deserved. Nevertheless, Hypixel Admins saw this video and banned him for 30 days for promoting cheats, despite Tommy stating that the video was complete satire.

Another incident Tommy was involved in occurred on April 27, 2020. This one revolved around his video titled "I installed 13 Minecraft hacked clients and did this..." People on the Hypixel Forums started noticing that this breaks Hypixel's YouTube Rank Policy, and several people started began posts about this pointing out he might get his rank removed or banned on Hypixel. Tommy confirmed later on stream that Simon, the owner of Hypixel, said it was completely fine as long as it did not become a trend. Tommy has made many hacking videos since then and has yet to be banned again.

On September 20, 2019, he officially announced he acquired YouTube rank, but later, on April 27, 2020's stream, said it was difficult to gain the rank, as there is a rule where you can't have a punishment in the last 6 months. Due to his 30 day ban on June 26, 2019, he could not apply for this, but a Hypixel Admin, Jamie, was nice enough and gave it to him anyway.

The first SMP he joined was SMPEarth. He was one of the last-minute members of the roster. He managed to get in due to a last-minute YouTube Gaming live stream. Information about his SMPEarth time can be found here.

A few days after March 12th, 2020, Tommy was played on the AnotherSMP (aka AnothaSMP). He only made around 5 streams on the server, and none of them turned into content on his main channel, but still went onto his VODS Channel. He often played with TimeDeo on the server.

On May 12th, 2020 TommyInnit opened up a Minecraft realm with a real-life friend, Cyberonix. Eventually, the roster grew to RudyInnit, TimeDeo, VoiceoverPete, Wisp, Badlinu, Bitzel, and JackManifoldTV On May 13th, 2020 VoiceOverPete unofficially named it SMPInnit. Currently, Tommy lives in the T Tower along with TimeDeo and JackManifoldTV.

Tommy was part of an SMP called Blockworth with many of his friends and other YouTubers. He recorded and uploaded the videos on the TommyOutit channel. Currently, all Blockworth content from Tommy is either privated or deleted.

Tommy is a part of Dream's SMP "Dream Team SMP," where he started a war with Dream over music discs. Tommy had also joined L'Manberg (past name Manberg), a separate part of the Dream Team SMP which declared independence from them. L'Manberg's members are Tommy, WilburSoot, Tubbo, Fundy, JackManifoldTV, Quackity, Niki Nihachu, and (formerly) Eret. L'Manberg had been raided frequently by Dream, GeorgeNotFound, Sapnap, Purpled, Punz, and Ponk, who banded together to fight them in ongoing war-like battles. L'Manberg was then taken over by Jschlatt after the events of the L'Manberg election, where Tommy and Wilbur were banned from L'Manberg, which was then renamed to Manberg by Jschlatt. Tommy became part of Pogtopia, a commune formed by Wilbur for the purpose of taking down Schlatt. Tubbo was a spy for them, before his execution at the hands of Technoblade. After some amount of plot, Wilbur blew up L'Manberg, and Technoblade spawned two withers (one notably named "Subscribe to Technoblade). After the blowup, Tubbo, "Ghostbur," and such rebuilt L'Manberg, them living in L'Manberg along with Quackity, Ranboo, Phil, and Fundy. Karl Jacobs, Dream, and GeorgeNotFound, while not having a house in L'Manberg, hung out quite a lot in the area.

On August 7th, 2020, Tommy met up with Tubbo. The next day, he met up with Wilbur Soot, Ph1LzA, Fundy and Niki Nihachu in Brighton. He documented this in a vlog. After going to the arcade and purchasing 2 "vlog guns" (nerf guns) and a yo-yo in return for arcade tickets, Tommy, along with Wilbur's housemate & fellow SootHouse member David, stole Wilbur's wallet and office key to gain access into his office where he streams. Tommy started streaming and was interrupted after 5 minutes by Wilbur who had discovered he was in his office and streaming. The live stream ended abruptly and Wilbur quickly went live again to apologize for Tommy's misbehaving. After all the shenanigans, Tommy ended up accidentally leaving both vlog guns in Wilbur's office, one of which was later destroyed on stream by Wilbur in MCC8, and the second one to be accidentally broken by Wilbur in MCC9, again on stream. 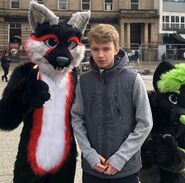 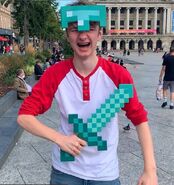 Tommy with a foam diamond sword and helmet outside

Tommy with his Golden Play Button 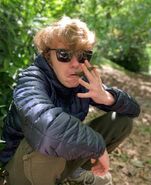 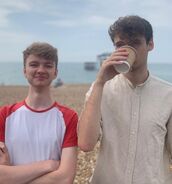 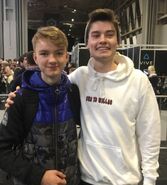 Tommy with Kai Ross-Best and JackSucksAtLife

Tommy with a cutout of Dream 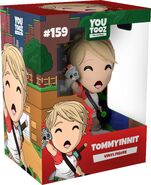 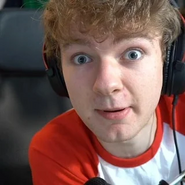 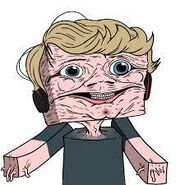 MeatCanyon's style of Tommyinnit
Add a photo to this gallery

Retrieved from "https://youtube.fandom.com/wiki/TommyInnit?oldid=1122712"
Community content is available under CC-BY-SA unless otherwise noted.