On the August 23, Sana released her debut video, where she talked about herself and her interests. Prior to this, she had uploaded a short. She revealed that she liked pasta, macarons, and round things like baby seals and planet Earth, and when asked for her dislikes, she stated that she disliked sneezing, as her sneezes could potentially destroy the Earth, and that she thought that mosquitos were a mistake. She also discussed her hobbies, astronomy, astrology, graphic design, drawing, traveling, hiking, snorkling, camping, and eating.

Sana also stated that her favorite games were "cute, bad, and psychological" games and that she also enjoyed Pokémon. She was also an anime fan, with her favorites being Kyousouguga, Uchouten Kazoku, and Katanagatari. She also talked about music she liked, which included electronic dance music (including Moe Shop and Ujico*/Snail's House), Go Shina, YOASOBI, and Eve. She also stated that her dreams were to get a telescope, try astrophotography, see her mascot Yatagarasu in 3D, collect the laughter and smiles from everyone, and last a year (i.e. until 23 August 2022) without destroying the Earth.

Sana has stated that regarding her schedule and content, she plans to make astrology streams (performing astrology with the hashtag #Holoscope) and "Kuso Monday", a series where she plays rubbish games.

The next day, she uploaded the first episode of her weekly series Holoscope, titled "【#Holoscopes】01. What bread are you?". The series was about astronomy, star signs and what they indicated about the viewer. She also streamed the games Celeste and Rhythym Heaven Fever, and on the August 27, she hosted her first watchalong, of Insterstellar (2014) along with Kronii. On September 9, she uploaded her first drawing stream.[1] She also hosts karaoke and chatting streams.

While gaming she tends to act really excitedly and competetive, once knocking over several "urns" (actually ceramic pots) in I am Bread. In her Pokemon streams she is considered to be one of the luckiest players as she effortlessly caught several Pokemen and emerged victorious from numerous battles. Ina'nis recalled that as kids, Sana would defeat her contiunously in the game.

In a vein similar to Ollie, a running gag is Sana flirting with others, but being rejected, with her flirting targets being her genmates. When she's with Fauna she often reminds her of the unreciprocated crush she has on her, only for Fauna to insult her back, not realizing that her insults turn Sana. Baelz finds Sana's flirting hilarious, though Kronii rejects it outright[2]. All of her attempts at flirting with Mumei go over her head[3][4].

Sana and Fauna were part of a chatting stream with Calliope, and the two also played Mario Party Superstars with her and Ina'nis[5][6]. Sana also was the winner of the EN x ID Pokemon Holo Throw Down, beating out Reine, Ollie, Calliope, IRyS and Mumei[7].

Being from Hololive's second EN generation, her first participation in a competition was the HoloEN Among Us tournament.

On April 22 , 2022, Sana was interviewed by Crunchyroll[8]. In a later interview, she would reveal her top 10 anime (in no order) to be Katanagatari, Showa Genroku, Daily Lives of Highschool Boys, Demon Slayer, Rakugo Shinju, Great Pretender, The Eccentric Family, Sayonara Zeboutsu-sensei, The Fate movies, March Comes in Like a Lion and Kyousogiga[9].

A member of the Council and the Speaker of "Space," the very first concept created by the Gods.

After being materialized in the mortal realm, she began researching astrology in earnest for one particular reason. However, she soon stumbled unknowingly upon the Forbidden Truth, and was turned into an apostle for the Ancient Ones.

"Space" refers not only to this universe we live in, but all dimensions and matter to exist. It is a concept unbridled by definition, and one that continues to grow in scope limitlessly. As it is yet to be fully explored by man, her seemingly strange behavior and speech can be explained away with a simple, "Humanity simply isn't yet ready to understand."

As a side note, despite how she may look, she is quite chi... young.

On October 25, the official Anime NYC Twitter account tweeted that every HoloCouncil member were scheduled appear in "Anime NYC".[10] On November 2, Omocat tweeted that they scheduled a collaboration with all of HoloEN[11].

Her fans are called "Sanallites". Channel members gain perks such as exclusive watchalongs. So far, Sana has streamed A Silent Voice and Violet Evergarden: The Movie, chatting streams and illustration streams. 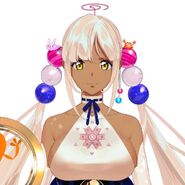 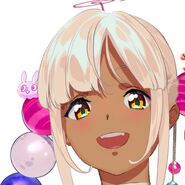 I come in pease

From her Interstellar watchalong with Kronii 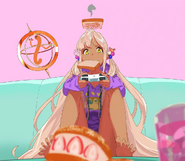 Sana and Fauna in Minecraft 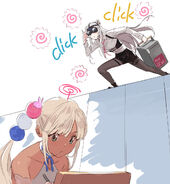 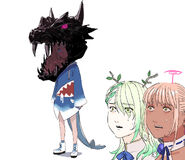 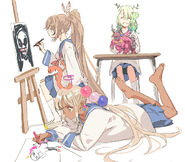 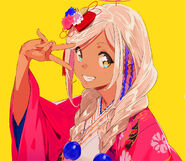 Sana in a kimono

Sana with a Switch 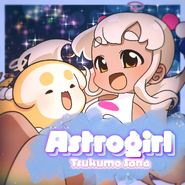