Tom (born: August 16, 2002 (2002-08-16) [age 19])[citation needed], better known online as Turkey Tom or TomDark, is an American commentary YouTuber who makes commentary videos mainly focused around criticizing other YouTubers and their content, as well as videos about the history of certain YouTubers. He has also made videos about websites such as Reddit and DeviantArt, as well as an assortment of various other topics.

He is also part of the Half Baked Podcast along with Nicholas DeOrio and Lord Vega aka "Daddy Vega".

Tom makes videos about the history of YouTube and meta-analysis of what goes on behind the scenes, as well as recapping controverises and drama and giving his take on them. His videos are of an informative and educational nature, though laced with critiscm, and sometimes he includes his own personal experiences. He occasionally makes off topic videos, such as his view on Marvel movies. He is also considered to be a prominent member of the YouTube commentary community.

He is also a voice actor, and in the summer of 2019, Tom lent his voice to play Link in Baron von Brunk's stop-motion animation LEGO Zelda Cereal Commercial video.[citation needed]

Tom made a second channel, originally called "Tom After Dark", though was later renamed to TomDark. On his second channel, Tom posts rants and well as commentaries. His rants also use newer character stills and gameplay, with the new character still wearing a red and black long sleeved shirt under a short sleeved black shirt with the word "Dark" on it.

When YouTuber Slazo was accused falsely of being a rapist, Tom came to his defense, releasing two videos on the subject, and highlighting the misdeeds of the accusers.

One of Turkey Tom's biggest inspirations was Zaptie, a YouTuber who left the internet due to accusations of sociopathy and pedophilia thrown at him by his friends. Tom and Nicholas DeOrio would make videos on the situation, eventually proving Zaptie's innocence. This also led to the exposing of DeodorAnthony, ImAllexx, BionicPIG and Elvis The Alien. When Zaptie returned, the accusers tried their best to avoid discussing him.

Sometime in 2018, Tom had made a video about the largely controversial cartoon reviewer TheMysteriousMrEnter. In said video he insults Mr. Enter by calling him an "incompetent fool who has no idea what he's doing". Tom also made jokes about MrEnter being a pedophile, which people took as an accusation. After MrEnter made his response video about his online harassment, Tom took the video down and apologized in two different videos, clarifying his intent and expressing regret.[citation needed]

In his "TheOdd1sOut, Tim Tom, Spechie & Tabbes: Criticism Not Welcome" video, he talks about Spechie who was infamous in the past for her rude and spiteful videos, as well as her dismissal of criticism. Tom revealed that Spechie had blocked him on Twitter to provide examples of her rejecting criticism. However, it turned out that Tom had actually been blocked for a tweet in which he said that Spechie had gotten, "really fucking fat lately", which he notably did not include in the video.[citation needed] He would later show regret for his actions.[citation needed]

During the Slazo situation, Tom accused Squizzy of being an animal abuser. He later clarified his intent and explained why he had done so, but still regretted his actions and showed remorse. Squizzy would then talk about how she was suicidal, and Tom would take down his original video on the Slazo situation for a while. It is currently still up.

In November of 2019, Twitter user and YouTuber Dangelowallace accused Tom of using anti-Semitic remarks/imagery in his video on YouTube sponsors, which attracted anti-semitic comments from his audience.[2] The remarks in question included jokes made at the expense of Ethan Klein, who is Jewish, and a 20-second skit about the USS Liberty, an American research ship accidentally attacked by Israeli forces in 1967. Tom denied that any anti-Semitic material was used in the video.[3]

A few days later, Wallace leaked DMs from over the previous year showing Tom repeatedly using the N-word in a racist and derogatory manner, and commenting on how his higher Patreon tiers were for "Jews with deep pockets".[4] Though Wallace did not initially have a way to verify the DMs, Tom admitted they were genuine. He denied any racism accusations, claiming they were edgy jokes, that the DMs were "a year old [though some were more recent as of writing]," and that "saying the n word does not make you racist." Tom Has used slurs in and out of context before and firmly states he is a free speech advocate even though he is also respectful of the lgbt [5]

On October 29, 2020, a Twitter user alleged that Pyrocynical had groomed him when he was 15 years old. According to the user, Pyrocynical had sent them drawn NSFW and fetish media. It was mainly wildly dismissed by people like Diasel Patches, PrisonMateLuke, and Sensitive Soci3ty and the allegations were considered as false, more evidence was provided on October 31st, 2020 via a TwitLonger and Imgur link containing a Twitter DM that occurred between the accused and Pyrocynical's girlfriend, Ida. This evidence was largely dismissed as well due to multiple inconsistencies, such as how the accused never contacted authorities and used the word "grooming" incorrectly. On November 10th, 2020, Pyrocynical addressed these allegations via a Reddit post on his subreddit, dismissing them and providing additional information such as how the accused lied about their age and remained in contact with him until September 2020[6].

In response to both the original statements made by Pyrocynical and the Twitter user, Turkey Tom uploaded a video on December 1st, 2020, titled "Pyrocynical's Lie: Setting The Record Straight," in which he claimed that Pyrocynical had lied about not knowing his accuser's age.[7] Five days later, on December 6, Turkey Tom published a Google Document titled "Proving Pyrocynical's Guilt: Debunking Every Argument," in which he set out to prove his stance with regards to the allegations, covering several of the arguments that both Pyrocynical and his defenders had made. Finally, four days after that, on December 10, Turkey Tom uploaded a video titled "The Pyrocynical Files (+New Leaks)." While at first, reception to Turkey Tom's videos had been mostly positive and many commentary channels now believed Pyrocynical was at fault, public perception changed yet again when Pyrocynical released a full statement on his YouTube channel responding to Turkey Tom and calling dishonest and claiming that he painted a false narrative about the situation.[8] Turkey Tom then made a response a few days after Pyrocynical's response, that received backlash[9], resulting in the comments becoming only Beat It by Michael Jackson. The video now sits at over 92,000 dislikes to 10,000 likes.

On March 2, 2021, Tom announced his return back after a long silence. He then uploaded his next video[10]. Many of his fans supported his return, whilst many outsiders of his channel condemned and criticized him for his previous actions that he still hadn't apologized for.

Once he returned he began uploading every day for a week, ending with a video about how LeafyIsHere thought he was Zaptie[11]. At first, his videos were mass disliked, but gradually, this slowed down. He made several videos on controversial YouTuber FuturisticHub[12][13], which resulted in FuturisticHub sending him several threats, saying things such as Tom's face was "going to end up worse than the old people in Midsommar"[14]. He would also be one of the first to make a video on John Swan's recent controversy. He would then change his character stills, now wearing a black hoodie. 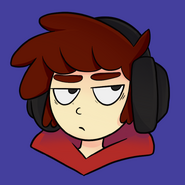 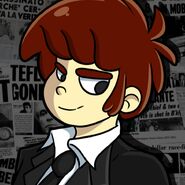 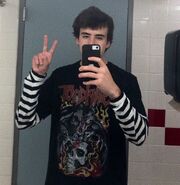 Tom and his girlfriend