Wikitubia
Register
Don't have an account?
Sign In
Advertisement
in: YouTubers, Users who joined in 2010, Male YouTubers,
and 12 more

Not only has Vik uploaded daily videos on his main channel daily for four consecutive years, he has also kept with 136, almost daily episodes/streams of "Minecraft" SMP server called "How To Minecraft" with other YouTubers. How To Minecraft Season 4 recently ended on September 23, 2017, and in the same year Season 5 was launched on the 8th of December.

Vik joined the Dream SMP on the November 13, 2020, alongside fellow YouTuber LazarBeam.

Vik is a British YouTuber who was born in Guildford, Surrey in 1995. At the age of nine he moved with his family to Sheffield. He has two older brothers who have never been seen in videos. In the mid-2010s, rumours/jokes circulated about Lewis Redman being Vik's other brother - but in reality they have no actual relation.

Vik attended Silverdale School from 2006 to 2013. He gained a high number of A*s in his GCSEs in 2011, and 1 A* and 3 As in his A-Levels in 2013. During his A Levels, he got offered a place at University College London (UCL) to study Natural Sciences, but he declined the offer to do YouTube instead. Vik is therefore the butt of jokes about how his parents are "disappointed" that he isn't a doctor.

Vik registered an account with YouTube in 2010 when he was 14. He originally wanted his channel to be called "Vikster" (a portmanteau of "Vik" and "gangster") but it was already taken. "Vikstar" was also taken (as was "Vikstar123") so he eventually settled on "Vikkstar123" - leading to many years of people thinking his name was actually spelled with an extra 'K'.

Vik has been a part of the Sidemen since 2013 but he joined a short period of time after the other five members (excluding W2S at that time) had formed. Vik lived in the Sidemen House alongside Simon, Josh, and JJ from February 2014 to November 2018.

Unlike the other Sidemen, Vik isn't a big fan of FIFA and is best known for his Minecraft and first-person shooter videos, as well as Grand Theft Auto V. In 2017, Vik started focusing primarily on Fortnite.

Vik was a part of "The Pack", and all their members are Minecraft YouTubers who record with Vik on both of his side channels, but almost never on his main. However, fellow Pack member Lachlan appeared in Sidemen gaming videos at somewhat frequent intervals in 2017 and 2018. Vik has gone on record to say he prefers The Sidemen to the Pack. In 2015, The Pack disbanded.

In 2021, Vikkstar is participating in the MC Championship, in Team Red Rabbits with Tubbo, Niki Nihachu, and TommyInnit.

Any jokes targeted at Vik are often related to his Indian ethnicity. Various members of the Sidemen have been known to edit Vik's movements in their videos to make it look, as if he is dancing to the song "Mundian To Bach Ke".

Much like Ethan and the jokes about his sexuality, Vik is often the butt of many jokes involving his relationship with his viewers. Vik often suffers the most during the majority of the Cards Against Humanity sessions that the Sidemen have, with card creators portraying Vik as an extreme paedophile.

There's a running joke among the Sidemen and their fans that particular members of the group, namely KSI, bully Vikk[1]. Vikk mentioned that in the past he would sometimes be affected by this but has said many times that it no longer affects him as they are all friends and a lot of the time it is just entertainment for the Sidemen videos. This joke regularly appears in KSI's reddit videos.

In older GTA videos around 2014 and 2015, Vik referred to himself as "Helmet Boy", and he lives the "Helmet Boy Origins". In his "Helmet Boy" persona, Vik wears a helmet with no other armour and speaks in an exaggerated northern accent, much like the character "Devvo".

He believed that his helmet gives him heightened resistance to attacks in GTA, and he often tested this out with amusing results.

On August 15, Vikkstar123 dropped his own diss track against Deji - something Deji said would never happen - called "THE END". The song was so fire, many people have said there was no coming back from it and that the war is over. Even KSI reacted to it and admitted that Deji couldn't come back from it.

Nevertheless, Deji "reacted" to Vik's track, took it personally, got triggered, and said he'd make a new track aimed solely at Vik. Vik said that he will not be making another one, as the first was just a joke. 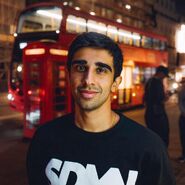