Vivienne Maree Medrano (born October 28, 1992 (1992-10-28) [age 27]), better known online as Vivziepop, is a Salvadoran-American animator who is known for being the creator of the comedy musical series Hazbin Hotel and Helluva Boss. She is also the founder of SpindleHorse Toons and the author and artist of Zoophobia. She was born and raised in Maryland. Vivienne studied at the School of Visual Arts in New York City and graduated in 2014.

Vivziepop uses her YouTube channel to post animations and updates on Hazbin Hotel and Helluva Boss. She also uses her channel to livestream.

Viv currently makes content mostly on her current running shows Hazbin Hotel and Helluva Boss. She promotes both of the shows‘ merchandise in the channel and livestreams herself either working on her series or doing a Q&A. Before releasing the pilot of Hazbin Hotel, Vivziepop posted clips, music videos, animatics, or anything else that is related to the show.

Note: the following dates are according to SocialBlade. Dates may vary by ~1 day (2 days if you live outside of North America) due to differences in time zones.

Vivziepop worked (and still works) on many projects varying from short animations, animated shows, web comics and so on.

Zoophobia is a web comic about a woman named Cameron who is looking for a job. She finds one, but is in a whole new world called the Safe Haven. The Safe Haven is a world full of many beasts and animals and other beings. Cameron is put as a guidance councilor in an academy, but the problem is, she is zoophobic, afraid of animals. 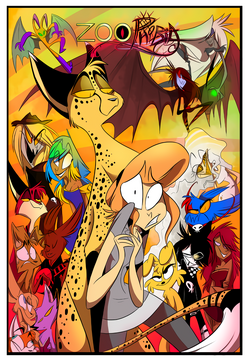 Hazbin Hotel is a web series about a demon who lives in Hell named Charlie. Hell has an "extermination" once a year where demons get exterminated by angels due to the overpopulation of Hell. Because of this, Charlie opens the Happy Hotel and hopes that demons would come to her hotel to rehabilitate and maybe even get redeemed and go to Heaven. She hopes that this is a more humane alternative to extermination and to help the overpopulation. After a disaster interview with everyone not on board with the idea of rehabilitation, Charlie gets the help of a powerful overlord named Alastor (or the Radio Demon) to run the hotel.

Helluva Boss is a web series that is set in the same universe as Hazbin Hotel It is about an imp named Blitzo who owns a business called IMPs (Immediate Murder Professionals) with two other imps (Moxxie & Millie) and and a husky (Loona). The IMPs is a business where demons can pay to get someone from Earth killed.

This page was created by DomiTheGamer on December 9, 2019.

Retrieved from "https://youtube.fandom.com/wiki/Vivziepop?oldid=676039"
Community content is available under CC-BY-SA unless otherwise noted.