Wakfu is a tactical turn-based MMORPG, developed by Ankama Games. Development began in 2006, and the game was released for  Microsoft Windows, macOS, and Linux on February 29, 2012. The game takes place 1,000 years after Ankama's previous game, Dofus. A spin-off game, Islands of Wakfu, was released on Xbox Live Arcade on March 30, 2011. An animated television series based on the game began airing in France from October 30, 2008. The series has also spawned various comics, a trading card game and a board game. 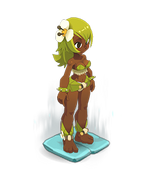 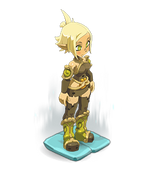 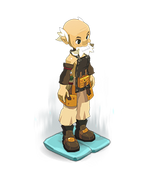 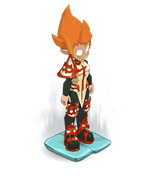 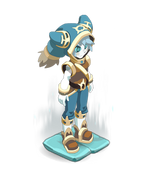 Yugo's sprite
Add a photo to this gallery

Wakfu: The Animated Series is a French animated television series produced by Ankama Animation, based on the video game Wakfu. The first season of 26 episodes began airing on 30 October 2008, and new episodes would continue to air into January 2010 on France 3. The show is animated with  Adobe Flash software; all the production is done in France except the special episodes "Noximilien l'Horloger" and "Ogrest, la Légende", both produced in Japan. The series is directed by Anthony "Tot" Roux, and character design is directed by Xavier "Xa" Houssin and Kim "Tcho" Etinoff.

A spin-off called Mini-Wakfu, which features humorous shorts with characters depicted in super deformed style has aired since September 2009. The special episode "Noximilien l'Horloger", the origin story of the main antagonist, Nox, was produced in Japan and features a radically different art style made by the same team of animators who worked on Kaiba and Kemonozume. The episode was directed by Eunyoung Choi with Masaaki Yuasa on character design. A successful Kickstarter campaign to produce an English-language dub of the series was launched in January 2014.There were two prior English dub attempts. The first two episodes were shown for the first time in English during the 2009 London MCM Expo; this dub pilot is believed to have been recorded in France by expats, many of whom previously worked on the English version of Code Lyoko. A second English dub pilot recorded by Ocean Studios was shown at Anime Expo in 2011.

The third season of the series premiered in France on September 2, 2017. Season 3 premiered on Netflix worldwide on April 6, 2018. The release was originally planned for April 1, but was delayed to avoid conflicts with the Easter holiday weekend and the respective holiday event in the Wakfu game.

Yugo (Leader of the Brotherhood of Tofu)

Percedal (Member of the Brotherhood of Tofu)

Ruel (Kama lover, Member of the Brotherhood of Tofu)

Oropo (Leader of the Brotherhood of the Forgotten)

Evangelyne (Member of the Brotherhood of Tofu)

Amalia (Member of the Brotherhood of Tofu, Princess of the Sadida Kingdom)

Adamai (Member of the Brotherhood of Tofu, Yugo's brother
Add a photo to this gallery

Add a photo to this gallery
Retrieved from "https://youtube.fandom.com/wiki/Wakfu?oldid=831787"
Community content is available under CC-BY-SA unless otherwise noted.