Kit, better known online as Wisp (also known as Wispexe), is an English Minecraft YouTuber. Kit is a competitive Ultra Hardcore player that plays on Minecraft servers like Hypixel, FluxPvP, Glade, and his own server, UHCArcade/MCArcade (In which he no longer owns). Even though he played on Hypixel, due to the hackers, he no longer regularly plays on Hypixel. He mostly plays twisted Minecraft UHC scenarios, like Randomizer, or "All stone is ___".

Kit does not reveal any personal information although he has done a face reveal. He did his face reveal on the video named "Minecraft but every item is random... (wisp face reveal)". Kit was also in events such as Minecraft Monday and Minecraft Saturday, and in SMP Earth. He participated in Minecraft Monday week 14 and was teamed with Technoblade. Wisp also streams on Twitch. On Twitch, unlike his YouTube channel, he is not PG on it. On his Twitch, he often creates polls, such as the poll for his hair. Pink, bald, another colour or let it grow. He has collaborated with various other UHC players including Speedsilver, Scotteh, and more. Currently, he plays challenges with TimeDeo and other friends. He Is Also Friends With Tommyinnit & Tubbo. 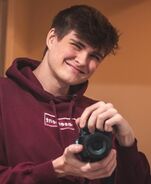