The purpose of these videos are to highlight significant events that happened that year by having some of pop culture's, especially YouTube's, current most popular celebrities dancing and acting to the various themes of trends that happened from the beginning to the end of the year as tribute to their creators as well as the viewers watching.

The videos often include a mashup of various popular songs from that year with easter-egg ridden visuals and have been known to be something many would look forward to at end the year. Despite this, most YouTube Rewinds in recent years have been received poorly due to YouTube focusing more on pleasing advertisers and the media rather then their content creators. This has lead to many YouTubers both big and small to create their own rewind videos in response.

The first ever rendition of the YouTube Rewind video was uploaded on December 13, 2010 to the YouTube Trends channel, which you can watch here: 2010: Year in Review. This rewind was not like the later ones as it the telling of the countdown of the opinionated best videos of that year, categorized by YouTube.

The second installment of YouTube Rewind was uploaded on December 20, 2011, which you can watch here: YouTube Rewind 2011. The video was a collaboration with Portal A featuring Rebecca Black as the host. While the installment had the title of "YouTube Rewind" it was more similar to the 2010 Year in Review format, featuring a mashup of existing videos on the platform.

YouTube Rewind 2012 is known as one of the best known YouTube Rewinds and was uploaded on December 17, 2012. You can watch the video here: Rewind YouTube Style 2012.

This installment was the start of the YouTube Rewind format we all would come to know and subjectively love. The trends were displayed not as a list but rather a sketch that featured many well known YouTubers of 2012. Due to this new edition, YouTube Rewind has become one of the most popular videos created by YouTube itself, afterwards featuring popular celebrities who are not even YouTubers or are barely associated with YouTube themselves.

YouTube Rewind 2013 was uploaded on December 11, 2013, which you can watch here: What Does 2013 Say. The format was similar as of the 2012 Rewind, but featuring more and different types of YouTubers.

YouTube Rewind 2014 is known for having the best like to dislike ratio and was uploaded on December 9, 2014, which you can watch here: Turn Down for 2014. YouTube collaborated with Portal A for this installment as well.

YouTube Rewind 2015 was uploaded on December 9, 2015, which you can watch here: YouTube Rewind: Now Watch Me 2015. This installment was not received as well as past installments as it referred to more controversial topics such as LGBT rights for example. YouTube collaborated with Portal A for this edition as well.

YouTube Rewind 2016 was uploaded on December 7, 2016, which you can watch here: Rewind: The Ultimate 2016 Challange. YouTube collaborated with Portal A for this edition as well.

The 2016 video became the most viewed YouTube Rewind in the matter of months, and is also YouTube's fastest video to reach 100 million views, doing so in just 3.2 days. It is also the third most liked non-music video of all time with over 2.75 million likes. On December 14, 2016, shortly after the 2016 Rewind video was released, the Spotlight channel surpassed 1 billion total video views.

YouTube Rewind 2017 was released on December 6 of that year. which you can watch here: YouTube Rewind: The Shape of 2017. This installment was the first YouTube Rewind to take place during the YouTube's "trending videos page" era, reaching the #1 most trending YouTube video position almost immediately and held the title for two days, making it the first video from the YouTube Spotlight channel to reach the #1 most trending video position on YouTube and one of the longest #1 trending YouTube video reigns thus far, receiving 50 million views within it's first day of release.

Due to the video's presence, YouTube put various playlists on their trending page under YouTube Rewind 2017 and on top of the following trending videos for the rest of that day and half of the next. The playlists consisted of general top videos, top music, gaming, trailers, and even specific YouTube categorizes such as Despacito (which along with being a prominent part of 2017's edition of YouTube Rewind was a category of videos surrounding a video which became YouTube's most viewed the same year), etc. videos of the year, making it the first time the trending page featured that.

The video was the theme for Google's layout from the video's release to the day after, and the music in the video was composed by The Hood Internet.

This installment had more dislikes than usual due to many believing it ignored many creators and trends of 2017, both positive and negative, and brought "irrelevant" or "bad" replacements (causing people to make videos such as "The REAL YouTube Rewind 2017" to show what should have legitimately been there according to them) with even famous content creators like PewDiePie and RiceGum talking about it and how they weren't in it personally, etc. The Behind The Scenes video did not get as many views, likes and comments as usual either.

YouTube Rewind 2018 was uploaded on December 6, 2018. After it's upload, the video automatically became #1 on the trending page, and kept the title for a day before Marvel Studios' new 'Avengers: Endgame' trailer was released to be #1 on trending.

However, the YouTube Rewind 2018 became controversial and overwhelmingly panned by many who felt that the video did not show as much actual YouTube content creators as it usually would be in previous rewinds. Many of the featured songs and featured people are not YouTubers or do not make videos for YouTube, like Ninja for instance who, despite having a YouTube account, is more known as a streamer on Twitch. The video contained talk show hosts and celebrities who did not start their careers on the platform. Some criticism even came from unexpected sources such as Marques Brownlee who had appeared in the Rewind as well as Pinkfong's Baby Shark, a children's song that went viral that year being featured despite many in the YouTube community not being fans of the song.

However, most of them did not make a massive impact on the YouTube landscape, other than Fortnite. Many massive YouTube trends in 2018 included the Logan Paul 'Suicide Forest' incident, the KSI vs Joe Weller boxing match, Tana Mongeau's TanaCon disaster, the demonetization of many videos, the rise of Tik Tok, the subscriber battle between PewDiePie and T-Series and the KSI vs Logan Paul boxing match which was the biggest amateur boxing match in history. None of these were included in the video despite being far more notable and larger in their impacts on the site. This was likely done as YouTube doesn't want to project a bad image to advertisers and the media.

The prominent theme of YouTube Rewind 2018 is "Everyone Controls Rewind". The video itself contained what the creators would want from a YouTube Rewind, and over halfway in the video, user comments are displayed, consisting of what viewers would want. This attracted criticism since the viewer comments were simply trends like the rest of the video, giving off a strong impression that the comments part of the Rewind failed to represent the community. Many people are also critical that PewDiePie, the biggest creator and channel on YouTube at the time was not featured in the rewind. Despite this, however Jaiden Animations did hide some PewDiePie references in the animation she submitted including the 399 "But can it do this?" Chair meme.

Criticism also came from what many believed to be a political slant to the video. During the campfire scene, the creators discuss social and political achievements made throughout the year such as being more motivated to discuss mental health, Asian representation in media and the 'empowering' art of drag. This has angered some who feel YouTube should not be politicized considering it is an entertainment platform, some who feel YouTube is pretending to care about said social issues, and some who feel that YouTube is becoming politically correct and leaning to the left to keep advertisers on the platform.

Some people also believe that T-Series did get referenced in YouTube Rewind 2018 when the dialogue "Asian representation in media. Major strides were made." was said in the video. T-Series is Asia's biggest YouTube Channel and at the time was still trying to become the most subscribed YouTube channel. Later on in early 2019, T-Series would surpass PewDiePie in number of subscribers and continues to hold the record of most subscribed channel to this day.

YouTube Rewind 2018 became the most disliked video in just 6 days, overtaking Justin Bieber's song Baby Ft. Ludacris which held that title for over 8 years and is currently at over 18 million dislikes.

As a response to the disaster that was YouTube Rewind 2018, PewDiePie, the most subscribed individual on YouTube, uploaded his own YouTube Rewind in collaboration with FlyingKitty, Grandayy, Dolan Dark and Party In Backyard. The video had a lot of positive feedback towards the community as the video shares moments, YouTubers and memes that happened in 2018 and was seen as a more accurate rewind video. PewDiePie's 2018 YouTube Rewind became the most liked YouTube video that wasn't a music video and surpassed YouTube Rewind 2018 in likes.

YouTube Rewind 2019 was uploaded on December 5, 2019. It gives the year's top lists created using data from November 1, 2019. The video got mixed and negative reviews, with some criticizing it for low production value as well as some saying it felt more like a Top 10 video rather than a YouTube Rewind video. YouTube states they made these changes in response to the backlash of 2018's YouTube Rewind. After an hour of being uploaded, the video had more dislikes to likes, having over 900,000 dislikes in just 6 hours.

Like in 2018, PewDiePie uploaded his version of YouTube Rewind 2019, made with FlyingKitty, Grandayy, Dolan Dark and Party In Backyard. The video was published on December 29, 2019. Each of the meme creators had a different theme to their respective sections in the Rewind: FlyingKitty's section was meme themed, Grandayy's section was YouTuber themed, and Dolan Dark's section was gaming themed. In addition, there were tributes for Dillon The Hacker, Grant Thompson (The King of Random), Juice WRLD, and Etika.

On November 12, 2020, YouTube posted a statement onto their Twitter account, announcing that they would not be making a rewind for 2020 due to the COVID-19 pandemic.[1] However, they mentioned that they would continue to make more rewinds in the future.

Due to the amount of hate the last few rewinds have gotten, some people have speculated that the real reason YouTube cancelled their annual rewind event was because of the amount of backlash they have recieved in the past for not listening to the userbase of YouTube. 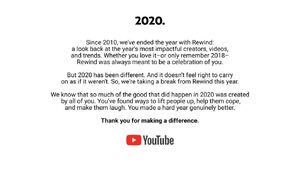 YouTube's official statement
Add a photo to this gallery

After it was announced that there would not be an official YouTube Rewind in 2020, MrBeast announced that he would be making a YouTube Rewind for that year. This video was published on January 1, 2021 and ended up trending at #1. It had the same editors as the YouTube Rewinds PewDiePie did in 2018 and 2019 with MrBeast mentioning that he was influenced by those videos when making his rewind video. The rewind was recieved positivly with mentions to various events that happened in 2020 as well as tributes to those who died in 2020 including Kobe Bryant and Alex Trebek. At the end of the video, MrBeast gave shoutouts to several small YouTube channels.

Retrieved from "https://youtube.fandom.com/wiki/YouTube_Rewind?oldid=1050075"
Community content is available under CC-BY-SA unless otherwise noted.