Wikitubia
Register
Don't have an account?
Sign In
Advertisement
in: YouTubers, Users who joined in 2009, Male YouTubers,
and 11 more

Josh was born in Bermondsey in South London in 1992. He is the eldest of the Sidemen, with Miniminter being born three days later. As a child, he was heavily interested in football and has been a fan of Millwall F.C. for his whole life, having been gifted a season ticket in 1998 which he has kept ever since.

Josh attended Bexley Grammar School from 2004 to 2009, and it was here that he met Tobi. Josh gained 1 A*, 10 Bs, and 3 Cs in his GCSEs with the A* being in Business Studies, which could explain why he is good at organisation and deals with a lot of the business behind the Sidemen brand. Josh achieved 2 Bs and 2 Cs in his A Levels, and went on to study Digital Film Production at Ravensbourne University, where he graduated with an upper second class honours degree (2:1).

From February 2014 until January 2019, he lived in the Sidemen House alongside JJ, Vik and Simon. He has been in a relationship with Freya Nightingale since 28 December 2011 and they have lived in an apartment together in London since early-2019.

Josh started uploading YouTube videos in 2008. He initially posted gameplay videos Call of Duty: Modern Warfare 2 but progressed into posting FIFA and other football-related videos. During this time, Josh edited some old videos made by KSI.[2] Josh was supposed to release (but never did) a Call of Duty montage called Illuminate in 2012.

Up until 2014, Josh rarely showed his face on camera and was often seen hidden behind a mask. For a long time he called himself "Josh Zerker" and adamantly defended this alias as his "real" name until 2015, when more and more people learned that his real name was Josh Bradley.

Josh is "officially" the Ultimate Sideman having won The Sidemen Experience in 2014 - a contest in the very early years of the group.

In June 2017, Josh launched his own podcast which he uploads to YouTube. These tend to be around 2 hours long and feature special guests. Josh co-hosts with Lewis Redman and Matt.

Josh launched his own clothing line in April 2017.

Tommy Tate, widely known as Tommy T, is a British road-man who fled to Los Santos to start fresh, after living a life of crime in South-East London, UK. Tommy has not spoken much about his life in England, simply saying that he had to leave as it was 'getting too hot for him'.

When he first came to Los Santos, he said that he wanted to leave the life of crime behind him and tried to stay clean. He managed to keep his record clean for 25 days. He had a close call with losing his clean record after only a few days in the city when he cut off Stanky Leg's ear, however he was able to escape the charge as there was no proof that he had committed the crime.

Tommy formed a gang along with Adam Ababwa, Dwayne Flores, Remy Brown, Moses Khan and Eli Porter, known as The Mandem. Together, The Mandem have committed numerous minor and major crimes since their formation. Tommy often serves as a voice of reason within the group due to him being the most level headed. The Mandem see each other as family and have said numerous times that they would do anything for each other. Despite originally saying that they would not have a leader, Tommy was officially appointed as the leader on August 19, 2021.

When The Mandem wanted to hit a bank, Tommy decided to learn how to hack. They purchased 15 practice laptops from The Game Masters and Tommy used all of them. He was able to hack four of them in a row, however they didn't purchase anymore practice laptops for quite a while. Several weeks later, Tommy purchased a new practice laptop for $15,000. He used it for the three days and managed to successfully hack the system nine times in a row. The day after the laptop expired, Tommy tried to get another one. He was contacted by The Game Masters, but he took too long to get to the location so when he arrived, he found a note saying 'GAME OVER'. The next day, Tommy tweeted Ready Player One again. After a few hours, he received a call saying that he had been given another chance. He received a ping and apologised for not arriving the previous day. They told him that he could still purchase laptops, but warned him never to be late again.

He is a very loyal person to those who have helped him. Due to Abdul giving him a tour of the city on his first day and giving him a job, he has said that he will never sell his taxi, even though he is no longer a taxi driver and now no longer drives it. He has also proved that he is willing to go to great lengths for his close friends and will help them in any way that he can.

Tommy has got a deep voice, which Dwayne said would work well on a drill song. Dwayne wrote a song for him and Tommy to perform called 'Tommy T', which was released as part of Dwayne's 'Golden Boy' EP. The song became incredibly popular, and is currently the most streamed song in Los Santos with over 9 million plays across all platforms. It is the only song that has gone Diamond in Los Santos. Despite having only made one song, Tommy is the second most streamed music artist in Los Santos, with the only artist to have more streams being Dwayne. The release of the song has made Tommy very famous within the city. Tommy is also very recognisable due to the lime green puffer jacket or lime green 'Strapz' vest that he almost always wears.

Tommy is the co-owner of four website domains. Along with Stacey, he purchased the eBuy, Gofundem, Sportsbook and Casino domains. They each paid for 50% of the websites, paying $23,500 each. After having a meeting with Ramee and Dean Watson about the Sportsbook website, Ramee gave him the $10,000 he spent on the website back.

Tommy has often said that he feels as though he is cursed. Because of this, the term 'The Tommy T Curse' is often thrown around between The Mandem. He believes he is cursed due to his unusually bad luck. He once span the wheel in the casino upwards of twenty times and only won on three of the spins. He frequently gets unlucky with jobs, such as when he wanted to hit Paleto and the Jewellery store but they had both been hit already. He has accidentally been punched and knocked down numerous times by people that weren't even aiming for him and he has been knocked off of bikes and sent through windshields by locals driving into him.

When Cerberus were preparing for the 'Corpo Kid' TV show, where they would hold a series of challenges with the winner becoming the CEO of Dean Watson's hotel, Ramee recommended Tommy as a contestant. He was then interviewed and made it through to the second day. On the second day his team won the first round, putting him through to the second round. During the second round, Tommy was tasked with putting together an event. At the end of the round, the contestants each had to vote for the three people that they thought least deserved to be in the final. Tommy, Dean, and Bunny received the least votes, and Cerberus decided to use their 'Golden Ticket' to bring Lexi back. In the final, Bunny won the first round, and Dean placed last. Dean was then told that he had to eliminate either Tommy or Lexi, and he chose to send Tommy into the final. After the final round, Cerberus told them that it was down to Tommy and Bunny to pick a winner. They were told to either pick 'Divide', where they would share the CEO role, or 'Conquer', where they would take it for themselves. They both chose 'Divide' and both became CEO's of the Diamond Casino Hotel.

Abdul (The Mayor of Los Santos at the time) came to Tommy one day with a plan to extort the mayors office for $1.3m by using a loophole where the mayor gets a certain amount of money to put towards personal housing, Tommy wasn't sure about the finer details about how they would go about doing this so he brought in Robert Locksley, at the time the Diamond Casino's CFO, to ensure that Dean Watson and Cerberus would be okay with the whole situation and be secure on the legal side of everything. They managed to pull it off initially however the police quickly caught on to the transaction and started questioning Cerberus, the hotel owners, then Dean, Lang and Leslie questioned Bunny and Tommy about the situation separately where they found out that Locksley had kept it from the group potentially jeopardising all of Cerberus's businesses. Tommy and Bunny both got $130,000 from the transaction as hotel commission. After a trial for embezzlement, Abdul was impeached, however he did not received any fines. After the trial, the money remained in the holding account. Locksley was also fired from the hotel.

Noah Scape is a Cadet for the Los Santos Police Department, Badge #544.

Josh Zerker flew into Los Santos in order to attend the event he was invited to called Mitchcon, while in the city he met up with his friend from back in the UK P Money along with Joann who streams on Mitch under BananaBree. The first fan that Josh ended up bumping into was Ramee El-Rahman who instantly started fanboying over meeting Josh.

Zerkaa is known for often saying unusual things or making weird noises unexpectedly and abruptly while gaming, as seen in many second channel videos. This has caused fans to speculate that Josh has Tourette syndrome although he in fact, does not.

There have been many famous bizarre quotes exclaimed by Josh over the years, commonly used as insults (making them even more unusual) 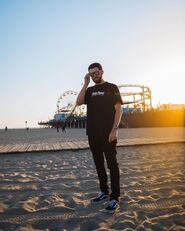 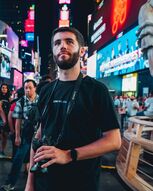