ZeroLenny is a Dark Souls and Soulslike challenge runner (age 25) from the Northwest of the UK. He is most known for his Dark Souls Experience/Broken Sword runs, and his other attempts to beat hard games with the worst equipment possible. His is also well known for the use of a text-to-speech voice to create a separate personality known as Imposter Lenny, which takes the form of the avatar that he usually creates if a game he is playing has a character creator. In recent months, however, he has moved away from Imposter Lenny being his primary voice on the channel, as well as moving into more  livestreaming as he is creating videos. He plays the piano in real life, and has made several piano covers and tutorials on his channel. He has also shown a fondness for Greggs steak bakes on stream, and has several recurring jokes throughout his video, for example how if given the opportunity in a game, he will cross-dress and call himself 'A pretty princess."

He is on moderate relations with other Souls YouTubers. He has called Indeimaus a "Basement dwelling scruffy goth" and frequently boasts of the Friday nights he spends with "Vaati's mum." He has also acknowledged others, such as Ymfah and Otzdarva, as well as generally ribbing Fighter.PL for his low-quality content. 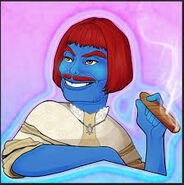 One of ZeroLenny's former YouTube icon.
Add a photo to this gallery
Retrieved from "https://youtube.fandom.com/wiki/ZeroLenny?oldid=652104"
Community content is available under CC-BY-SA unless otherwise noted.