Warning!
This article, Zoe Laverne, may contain material that is disturbing, such as child grooming and sexual harassment.

Zoe LaVerne is a social media personality that first got her start on the video sharing app Musical.ly in middle school and rose to fame by posting make-up videos, lip-sync videos and dance videos to the platform as a verified star.

At the time, she was in middle school. She received a lot of hate from her classmates at the time about the videos, but people loved them on musical.ly. She later attended high school until 2018, when she took her education privately because of the bullying. Laverne's parents said they felt she'd been robbed of a normal high school experience because of Musical.ly. The social media star was marked as a verified creator in March 2017, back when the application was still known as Musical.ly. Since starting her account, she has earned more than 1.5 billions hearts on her videos.

She began posting lip-sync performances on her favorite tracks on TikTok. Zoe once posted a comedy video where she mocked her own belly-dancing skills. Soon, she started collaborating with other "musers," which made her more popular on TikTok. Zoe and her fellow muser Terin Sottile once swapped their TikTok accounts for a day. This stunt was quite beneficial for Zoe’s social-media fame. She also posts vlogs on TikTok, through which she connects with her fans. Soon, she earned over 250 million “hearts.” Within just one year of being on 'TikTok,' Zoe became a verified muser. Her impeccable fashion sense and makeup skills earned her a top style guru badge.

Zoe is fond of dressing up and applying makeup. She created a self-titled 'YouTube' channel to post related content. Despite that, Zoe’s 'TikTok' fame helped the channel earn over 69 thousand subscribers. She had a second 'YouTube' channel, ‘Cody & Zoe,’ which she manages along with her boyfriend. The channel primarily consists of videos related to their personal life. Zoe and her boyfriend have done a few ‘Q&A’ videos, and in one of them, they collaborated with Danielle Cohn and her boyfriend. The channel has over 270 thousand subscribers. Zoe is equally active on Instagram.

Zoe LaVerne Pemberton, known as Zoe LaVerne on social media, was born on June 3, 2001 in Greenwood, Indiana, U.S.A to Debbie Pemberton and Doug Wright . When she was 8 years old she moved to Franklin with her family. There, she attended Franklin Community High School. She has one brother named Eric, and one step-brother named Cameron.

Around December 2017, Laverne made a monumental shift in her social media brand — she started dating fellow Musical.ly star Cody Orlove. Despite the on-again, off-again nature of their relationship, Laverne and Orlove consistently capitalized off of it, including by going on tour together, promoting sponsorships and merchandise together, and even by releasing a joint single called "Thinking Of You" in 2019.

Most importantly, Laverne and Orlove created a YouTube couple channel for "Zody," the name fans gave the pairing. The "Cody & Zoe" channel was the pair's most popular project together, and it currently has over 1.1 million subscribers. The channel was active between April 2018 and May 2020, and their popular videos are mostly pranks, including a cheating prank video that has more than 5.5 million views.

The couple broke[1] up in 2020 when she claimed he was physically violent with her and released audio as an example[2], but they got back together before breaking up again. J aubrey's documentary on her noted that it may have been to milk views from her audience.

In a video Zephan posted on YouTube titled "Ex Describes Her Relationship With Me," Zoe talks about meeting him basically the same way she met Cody. She was a fan of his on Musical.ly back in 2018. He added her back on Snapchat and they started talking. Even though they're not together anymore, they ended up on good terms— she says that he's her best friend.

But Zoe also said Zephan had a lot of "hoes" during their relationship. Zephan called their breakup "so ugly" and that he "would cry every night."

Dawson Day is the current boyfriend of Zoey. She is currently pregnant with his baby.[3] Later it was revealed her pregnancy was all fake.

Laverne said during livestreams that she hadn't cheated on Orlove. Later, she confessed[4] to cheating, but said the TikTok star she cheated with, Drayke Austin, had pursued her first. Then, in a livestreamed confrontation between Laverne and Orlove on Instagram, Laverne changed course and said she drove the cheating. The changing narratives led to an outpouring of animosity toward Laverne, who routinely melted down during live broadcasts — which further weakened support for her.

In a YouTube video also uploaded in May 2019, seemingly before getting back together, Orlove accused[5] Laverne of sexually harassing him by kissing him against his will despite him turning his head "back and forth" to avoid her while covering his lips and asking her to stop. On a separate occasion, Orlove said Laverne also tried to take his pants off against his will.

In April 2020 Laverne was recorded saying the n word, despite the fact that she is a white. A YouTuber named actuallynayomi documented it.[6]

In November 2020 when she got exposed[7] for kissing a 13-year old on the lips (while she is 19). After the news broke down, she made a video[8] responding to the claims defending herself, saying that people were making the situation bigger then it was supposed to be, and that the boy she kissed supposedly approved of the act. She also stated that the age-difference was a bad thing, and that they both stopped after they realized what they were doing. DramaAlert later on made a video about the situation, saying that it does not matter that she's a female. Repzion and SomeOrdinaryGamers[9] also made videos regarding the situation, calling her out for her actions. Not even the announcement of her pregnancy[10] made on February 22nd, 2021 could cushion the severity of her actions. Zoe also lied about her arrest.

In an apology, Laverne said she "caught feelings" for the young fan, who goes by Connor Joyce online. Laverne blamed the interaction on the pair becoming "best friends," and denied that she had been "grooming" Connor.

Zoe also came under fire for her reaction[11] to Charli D’Amelio’s rise to TikTok fame, saying she wanted to take her down because she would surpass the amount of followers that Zoe had. Many people took issue with Zoe calling herself the star of TikTok. She has since apologized. 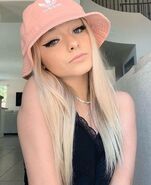 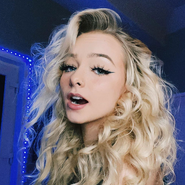 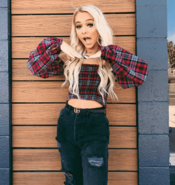 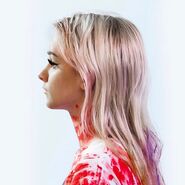